Made a little change

Today I decided to change the blog's name, in an effort to make it more representative of all the family names that are included.

You should have no problem accessing the Our Family's Genealogy Research Project blog as the only thing that has changed is the header; the web address remains the same.

Thank you for following my ramblings. 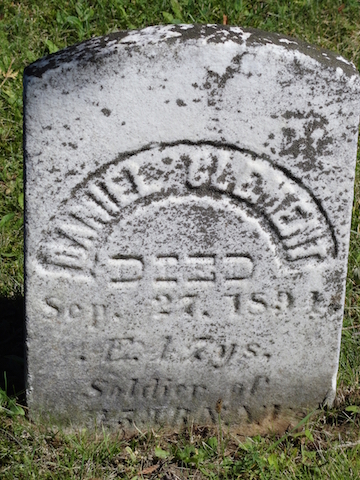 After more than a year of research today I finally have the location of Daniel Clement's final resting place. Not only the location but a photograph of the stone.

The photograph was made possible with the kind assistance of a volunteer, who not only went out to the cemetery today, but spent time with background research to confirm for me where Daniel was.

No longer a mystery left behind in a box

Email ThisBlogThis!Share to TwitterShare to FacebookShare to Pinterest
Labels: Clement

GAR Post 588 was chartered on April 13, 1891, remaining active until 1937 when the charter was surrendered.  It was named after General William Tecumseh (Uncle Billy) Sherman who died two months prior to the post's formation.   The photograph above was probably taken in 1891 when the post met for the first time.  It couldn't have been taken any later than 1905 as  Mr. Luther Wright, a member who is pictured, died that year.

While researching the post and its history I was able to identify most everyone in the picture to include their Civil War Unit and dates of birth and death see the chart below for more details. 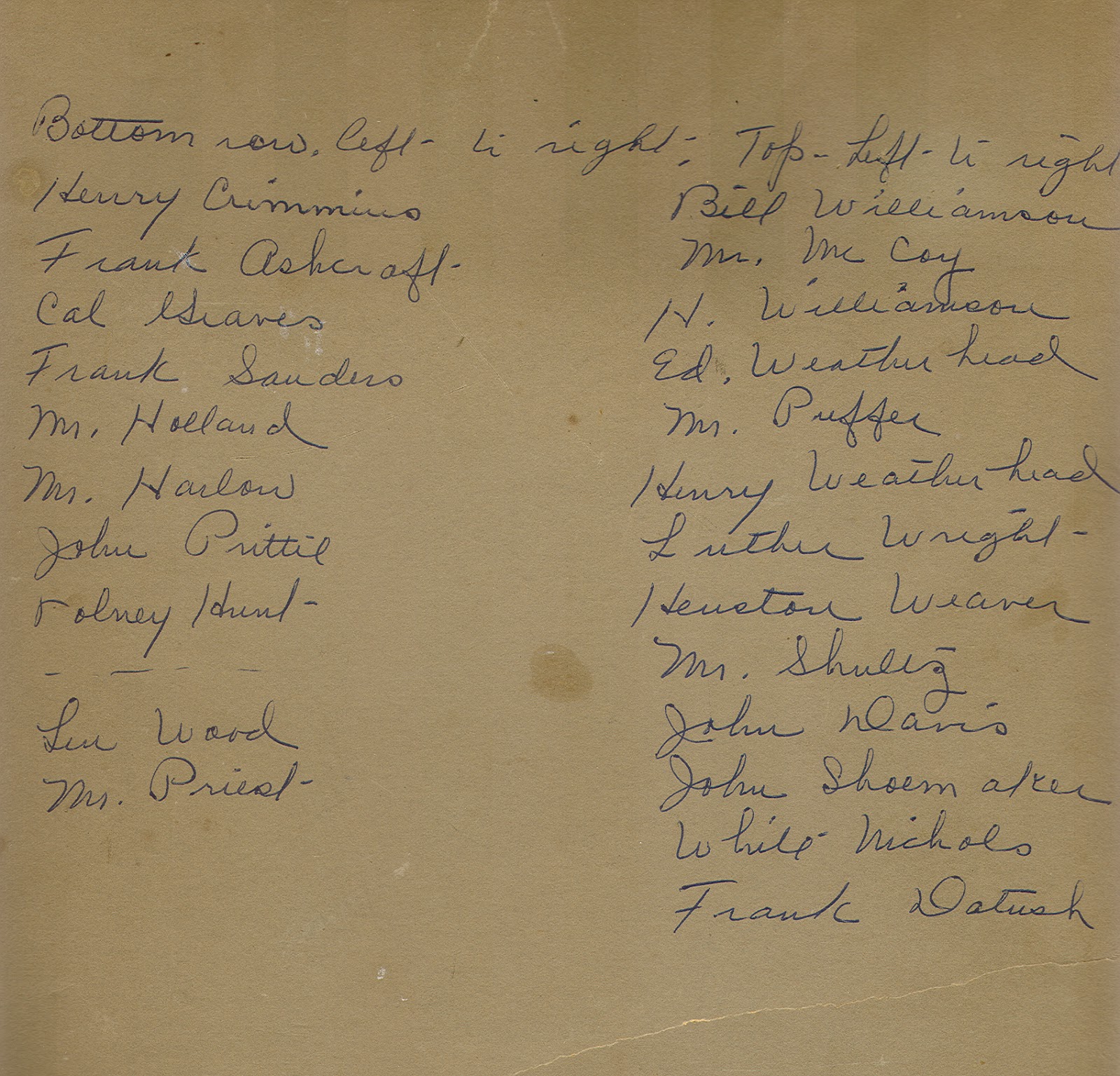 On the back of the original photograph are handwritten notes identifying all the members present.

Two family members are pictured in this photograph.

The first Franklin Sanders born 1841 the son of Philander and Nancy Sanders.

Franklin is the 1st cousin of Jennie M. Sanders, Harvey Jesse Lake's wife.   Frank Sanders served in the 10th New York Heavy Artillery Regiment from 1862 to 1865 when he was discharged at the end of the Civil War.

The second is Frank Ashcraft he was born in 1836 and died in 1913 he was related to Lorenzo Ashcraft, the husband on Anna Clement, Daniel L. Clement's youngest daughter.  Not much is known currently about Frank Ashcraft and his connection, but there are other photographs of him with the old family pictures that indicate a close connection.   He also served in the 10th New York Heavy Artillery Regiment from 1862 to 1865.

* There are people of the proper names and approximate age and the Wilna, NY area that could be these three men however more research must be done to prove this conclusively

The mystery of Orlo Sanders solved 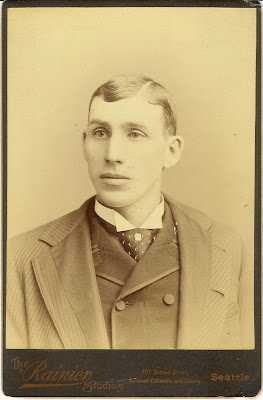 Another of those family mysteries;  I have been searching for Orlo Sander, he is my great grandmother's (Jennie Sanders Lake's) brother. He was born in 1861 in Jefferson County, New York to Jared and Sarah (VanAntwerp) Sanders.

He lived most of his adult life in Watertown, New York, many newspaper articles of the day can attest to this.  On August 21, 1887, in Antwerp NY, he married Jennette Ervin of Philadelphia, New York.   Old newspaper gossip columns reported that they were visiting or were visited by,  friends and relatives on a regular basis.   The last mention of Orlo Sanders or his wife Jennette was November 19, 1889 when he purchased property on Hunt Street in Watertown, New York for $585.00.

When I received these photographs I noted a curious piece of information; Orlo's portrait was taken at the Rainier Studio at 707 Second Street in Seattle, Washington. Jennette's photograph was taken at Lewis and McCollester studio in Carthage, New York.  So it was clear that Orlo at some point traveled to Washington State.  There is no indication on the photographs themselves when either of them where taken.   The possibility that he relocated to Washington State could certainly explain the reasons for the lack of information in New York.   However, family lore says that Orlo was killed by a falling tree sometime after 1880 in New York State, and was buried in or around Wilna, New York. 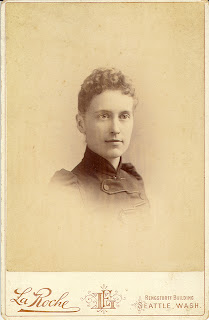 Then to add to the mystery, meet Mrs. Orlo Sanders,  Grace Chapin. Note that her photograph was taken at LaRoche Photographers at the Rengstorff Building in Seattle, Washington.  On the back of the card the street address is given and it is the same building where Orlo's photograph was taken.

I have not located any information as to what happened to Jennette, if she went to Washington, and died there or passed away in New York, nor have I found a divorce record.   Above is the obituary of  Mrs. Jared Sanders dated May 6, 1893. She died in New York and her obituary identifies her survivors;  note that Orlo is not listed; it would appear that he died prior to his mother.

A search of  Genealogy Bank located this record, from the  Watertown Daily Times, dated February 24, 1891, an announcment from the Odd Fellows Fraternal Organization,  Watertown Chapter  that Orlo Sander,s one of their members, had died in Seattle,Washington of Typhiod Pneumonia and that he had been interred there.

I have tried to locate a death and burial record in Washington State but so far I have not had much success; however, it does seem clear that the mystery of what happened to him has been solved.

No longer a mystery, left behind in a box 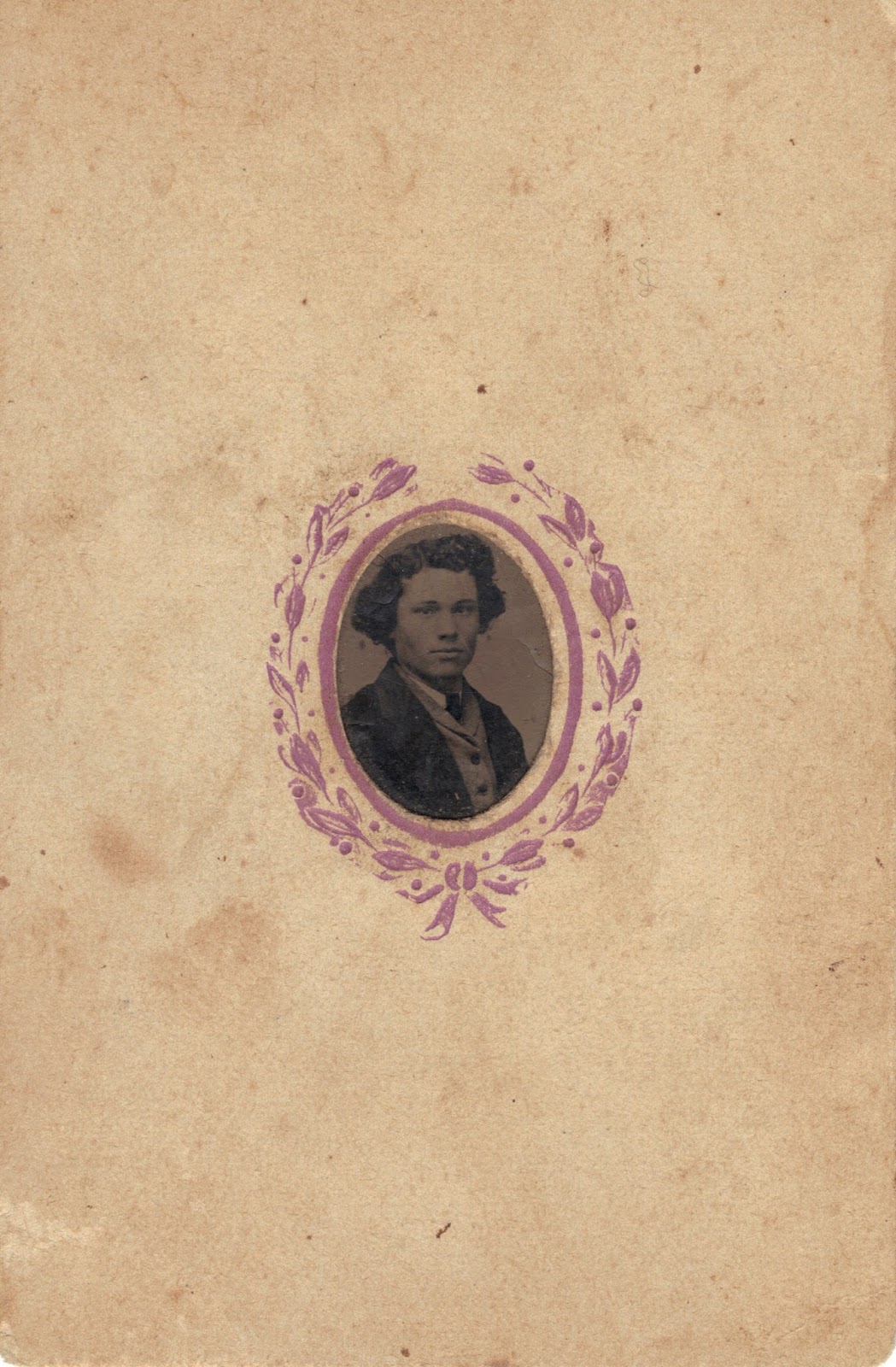 For a number of months I have been working on a project to identify family members in very old photographs which have been condemned to the proverbial shoe box. Since many of these picture are unlabeled it takes a fair amount of work to identify them.

This photograph came from material that belonged to Samuel and Emma Clement of Rowe, MA.  The photograph is of a male, approximately 20-25 years old, an extremely old tin type  image  1 inch tall by ¾ of an inch wide. It is taped to a card which measures 3 7/8 inches tall by 2 1/2 inches wide.  The photograph is extremely fragile and in all likelihood it has been physically handled for the last time.  I made several high resolution digital scans of it to preserve this important family photograph, while doing so I notice the back was severely corroded, and may need professional restoration to preserve it. 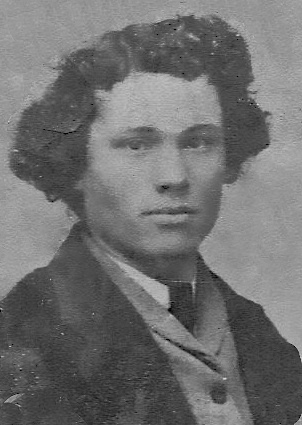 Tintype photography, a style popular in the 1860’s,  was considered “instant photography,”because you could go into a studio and in 10 minutes or so walk out with your picture, like the first Polaroids.  They were called “Tin Types” not because they were made of tin, but because you cut them apart from a sheet with tin shears or snips.  The plates were made of a light sensitized steel a little thicker than modern aluminum foil.

Using research materials that have  known dated examples and references as a starting place, I now believe that this photograph was taken between 1865 and 1867, which makes it just about 150 years old. The image to the right has been digitally enhanced so that it can be seen better.

Who this is:  Daniel L. Clement was born May 8, 1847 in Philadelphia, Jefferson Co., New York. His father and mother were Charles & Sarah (Bromley) Clement.  In 1863 at the age of 16, he enlisted in the 47th New York Infantry Regiment as a private and participated in the Civil War. He served until his honorable discharge on 30 June 1865 at Munson Hill Virginia.   I have written a blog article about Daniel his wife and parents; you can access those articles at the following links: Who was Daniel L. Clement : Who was JClement : Charles B. Clement. He returned home from the service,  and the following year, on May 10, 1866, 2 days after his 19th birthday he married Mary Jane Palmer.  They had 6 children, four of whom survived and farmed land in the Croghan, NY area, until Daniel's death in 1894.  He was buried in the Evangelical Baptist Cemetery in Croghan, New York.

Below are photographs that I have been collecting of Daniel and Mary Jane "Jennie" (Palmer) Clement's surviving children, from left to right is Mary "Mattie" Clement Herzig,  Anna P. Clement Ashcraft, Samuel E. Clement and Edwin Ira Clement. Look how closely Daniel's youngest

son Edwin resembles him, and how the others have traits that closely match his, with the possible  exception of Mary, who looks most like her mother.  These comparison photographs have really been the key to sorting out this mystery, along with some very good research tools and knowing the source of the material has really helped in successfully identify this photograph. 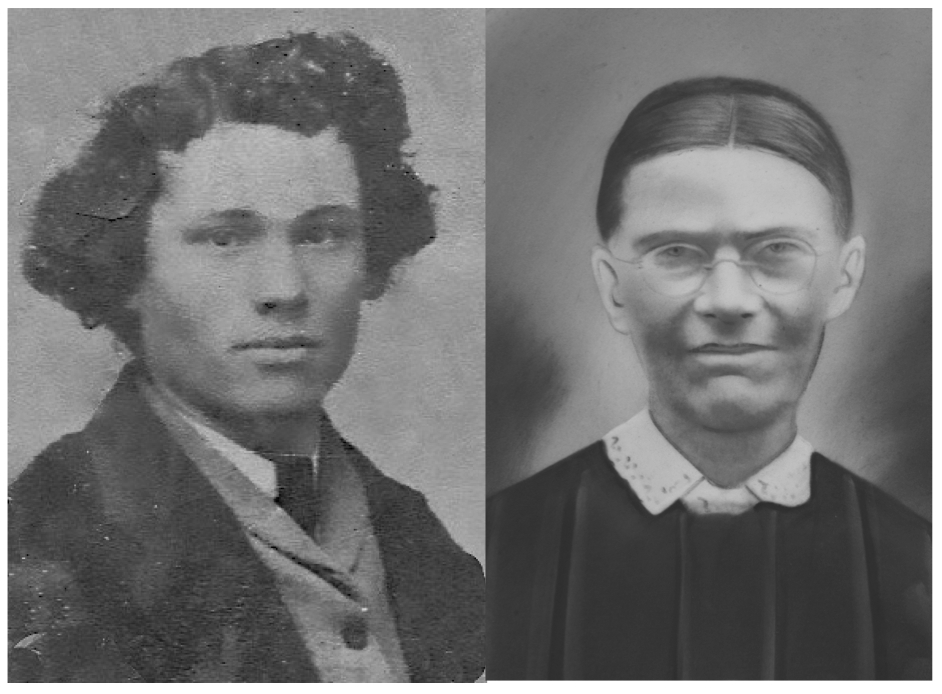 After Daniel's death Jennie travelled with her two son's Sam and Edwin to Colrain, MA where her daughter Mattie had relocated with her husband Albert and their family.

About 1905 she returned to New York with Edwin, Sam decided to stay behind to start his family. Jennie returned to Massachusetts around 1910, living with her daughter, for a time. Whether it was home sickness or illness, she wanted to return home to New York.  While arraignments were being made with Edwin to get her back home, she died suddenly she was laid to rest in Christian Hill Cemetery, on top of the hill, in Colrain,  Massachusetts.    I enjoyed researching the photographs and the feeling of symmetry that comes from bringing them together again, as if the family itself were reunited.

“The people who have left us are never truly gone until there is no one left to remember them.”